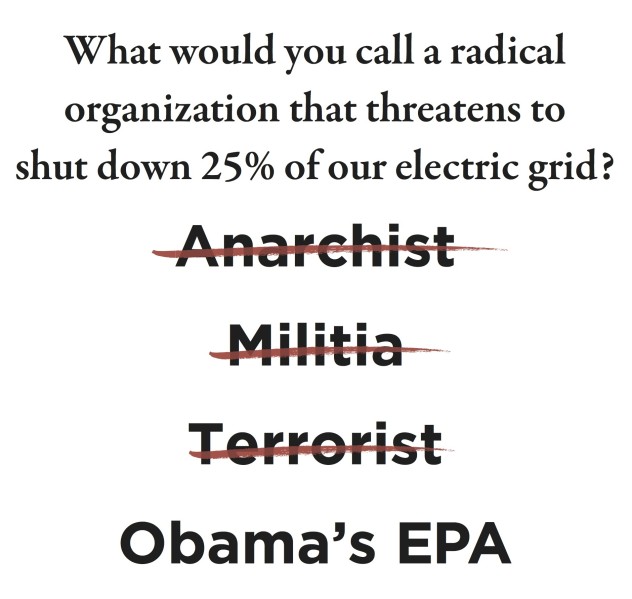 EPA Facts placed a full-page ad in USA TODAY on June 3 Politico on June 2, comparing the threat that EPA regulations pose to the country’s electric grid to that posed by terrorists. The ad highlights how new regulations on coal-fired power plant – including ones issued today by President Obama and the EPA – threaten to shut down a substantial percentage of the U.S. electric grid.

The ad reads: “What would you call a radical organization that threatens to shut down 25 percent of our electric grid?” The potential answers – anarchist, militia, and terrorist – are all struck out, leaving “Obama’s EPA” as the only answer. It then explains: “Obama’s Environmental Protection Agency has issued regulations that threaten to shut down about 25 percent of the energy that powers America’s electric grid. With radicals like this in power, who needs enemies?”

Over the next two decades, EPA regulations are expected to contribute to the closing of 60 percent of America’s coal-fired power plants, according to a new report conducted by IHS Energy on behalf of the U.S. Chamber of Commerce. Such a regulatory onslaught threatens grid reliability. Philip Moeller, a commissioner for the Federal Energy Regulatory Commission (FERC), said that EPA regulations could cause rolling blackouts in parts of the country. And, acting FERC Chairman Cheryl LaFleur mentioned “new environmental regulations” alongside physical and cyber threats in her congressional testimony on the biggest challenges the nation’s electric grid faces. Our ad highlights this often overlooked threat.