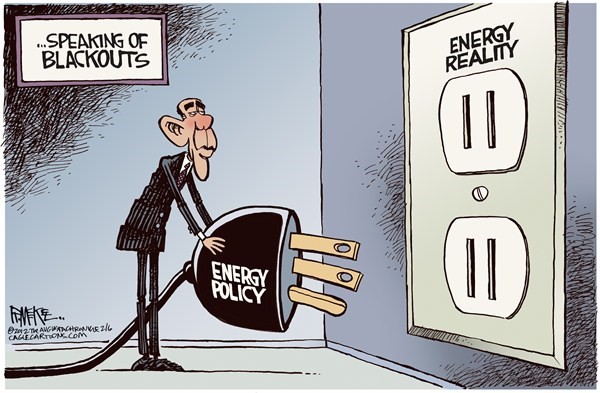 The Environmental Protection Agency’s (EPA) proposed carbon emission rule for existing power plants will help fulfill the president’s promise to bankrupt the coal industry and make electricity rates “necessarily skyrocket.” An overlooked but no less important aspect of the rule is its threat to America’s electric grid.

Testifying today before a House energy panel, FERC Commissioner Philip Moller warned Americans that “markets would need to be fundamentally altered and redesigned to implement EPA’s proposal.” Moeller’s warning merely echoes the stated policy objectives of EPA’s political brass. As ex-EPA official and convicted fraudster John Beale revealed in a pre-sentencing deposition, he and Administrator Gina McCarthy have conspired to “modify the DNA of the capitalist system.”

Part of this plan involves killing coal. Coal is America’s single largest source of electricity, supplying about 40 percent of the nation’s power. EPA’s proposed carbon emission limits, combined with other costly EPA rules and market forces, threaten to shut down coal plants across the country. The resulting lack of supply will make it more difficult for utilities to keep the lights on—especially during winter when heat and power are needed most.

Remember last winter’s polar vortex? To ensure reliability as temperatures plunged across the Northeast and Midwest, American Electric Power, which serves much of the Midwest, needed to run 89 percent of its coal-fired generating capacity that is slated to retire due to EPA rules. Next year, we may not be so lucky: Moeller predicts that EPA’s rules could cause rolling blackouts in parts of the country if temperatures drop too low. Even The New York Times fretted: “Coal to the Rescue, but Maybe Not Next Winter.”

EPA’s coal-killing carbon emission rule brings the Obama-McCarthy-Beale triumvirate one step closer to fundamentally transforming America. Unfortunately, it comes at the expense of American families who just want light at night and heat during winter.