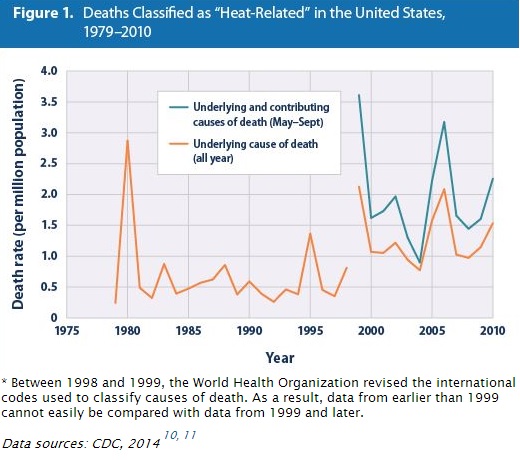 The EPA improperly interpreted “heat related death” data that was used to bolster its case for last week’s burdensome carbon regulations, an act which fellow scientists have called “appalling.”

Rather than present its data based on one criteria set over a given time (as is the norm), the EPA engaged in some apples-and-oranges shenanigans–cherry-picking the numbers to further the EPA’s favored conclusion that heat related deaths are increasing.

To the casual observer of the EPA’s analysis, it looks as though heat related deaths have been increasing since 1979. It takes a savvy reader to catch the fine print to find out that the World Health Organization revised its death classification between 1998 and 1999, meaning that post-1999 data should not be compared with pre-1999 data.

Sound complicated? It’s not, really. According to climatologists Dr. Patrick Michaels and Paul Knappenberger, “[The EPA] plots the two sets of not-easily-compared data side by side on the same chart, ensuring that they are compared! Such an analysis would probably grade out as an F in an undergraduate paper.”

The proper way to read the chart is to view these two data sets independently; in doing so, one finds that the heat related death rate has actually remained relatively flat.

This data deception fits with the EPA’s long history of using questionable science. The National Academies recently called it out for improper use of the scientific method, insufficient documentation, and a lack of consistency and transparency. With a track record like this, these mistakes may be more than just agency incompetence but rather part of a campaign to achieve a political – rather than scientific – mission. For an agency that considers science to be its “North Star,” that’s a scary thought indeed.