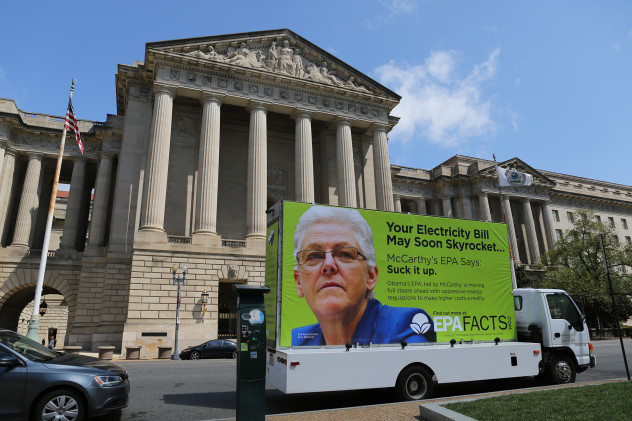 EPA Facts has put up a mobile billboard showcasing how Gina McCarthy’s EPA will hike Americans’ electricity bills. Starting today it will circle EPA headquarters in an effort to highlight the impact the agency’s regulations will have on ordinary Americans. Together with our recent video, “3 things you need to know about the EPA,” the billboard marks the start of our new ad campaign targeting the EPA.

The billboard reads, “Your Electricity Bill May Soon Skyrocket…” with EPA’s advice on how to deal with it: “Suck it up.” The ad goes on to read, “Obama’s EPA, led by McCarthy, is moving full steam ahead with oppressive energy regulations to make higher costs a reality.”

We have detailed the barrage of new EPA rules and the projected toll they will take on Americans’ wallets. For example, the EPA’s mercury and other power plant emissions (MACT) standards are expected to cost approximately $9.6 billion per year by the EPA’s own calculation and shut down nearly 20 percent of U.S. coal generating capacity. And, its Carbon Pollution Standards that limit carbon emissions for new power plants are widely projected to prevent the construction of any new coal-fired power plants and could raise household electric bills by up to $1,104 annually.

Our new mobile billboard hopes to bring greater attention to the negative effects of these regulations and highlight the EPA’s power and overreach as a whole.